The Global Aviation Digital Maps Software Market is projected to grow at a CAGR of around 6.51% during the forecast period, 2022-27, says MarkNtel Advisors in their recent research report. The Global demand for aviation digital maps is increasing, owing to various factors such as rising spending on aircraft manufacturing & increasing investments in military aircraft. The growing domestic demand from countries such as the US, Germany, and Canada for commercial & military aircraft along with the growing import of military aircraft to the Middle Eastern, European & Asian countries, has enhanced the requirement for digital map software in newly manufactured aircraft. For instance, in 2019, L3Harris Technologies bagged nearly USD10 million contract, for 96 digital video map computers (DVMC) & 51 digital map computers (DMC) for the US F/A-18 E/Fs & AH-1Z, including H-1 helicopters & 13 DMCs for the government of Bahrain.

Moreover, the growing concern for situational awareness like aircraft physical location in space, airspace reservations by other aircraft, etc., faced by civilians as well as by military flight crews fueled the demand for aviation digital maps software in the historical period. Furthermore, the companies also entered into agreements with the governments of various countries, such as the US & Bahrain, which positively affected the aviation digital maps industry.

Based on the map type, the market is divided into 2D & 3D. Among them, the 3D digital map segment holds the major market share, owing to its enhanced configuration that assists pilots in better situational awareness, thereby enhancing passenger safety. Therefore, the growing shift of aircraft manufacturers towards the digital 3D map is anticipated to grow at a considerable rate. Moreover, the digital 3D maps use computer graphics to provide geographic information & deliver real-time data about the aircraft.

Besides, these maps have been more efficient information providers & are expected to outrun the market of 2D maps in the aviation sector. In addition, the strategic partnership among the companies to introduce next-generation digital mapping systems along with the introduction of the advanced 3D map for commercial & military aircraft are further projected to boom the market growth during the forecast period 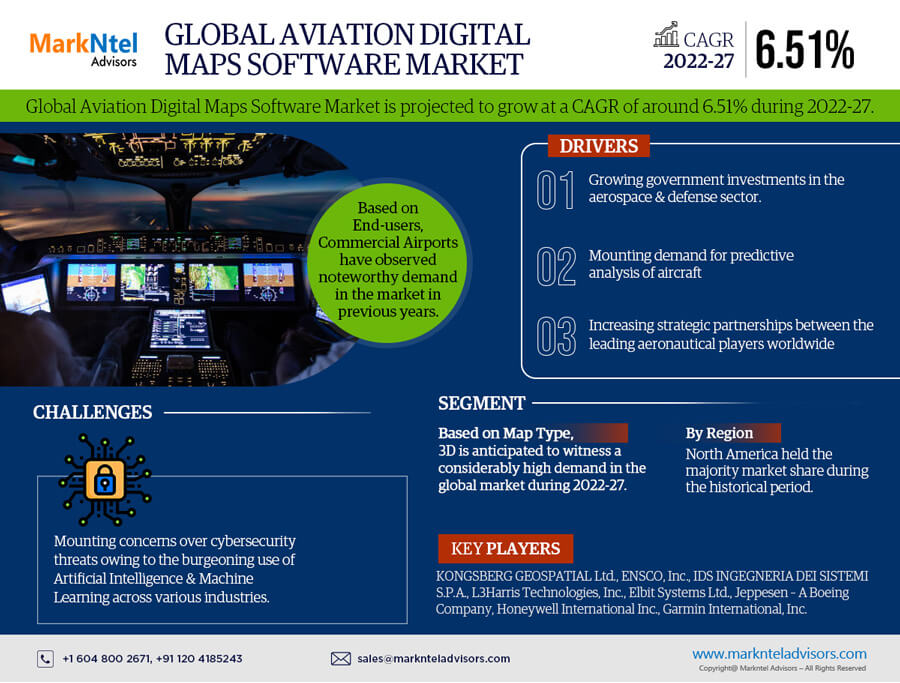 Based on end-users, the market bifurcates into Commercial Airports & Aeronautics. Of them all, the Commercial airports have witnessed considerable demand for digital maps software in the historical period, owing to the expansion of runways globally & the building of new airports. Additionally, the growing government spending for the expansion of airports to meet the demand of rapid air traffic growth due to rising air passengers is expected to create an opportunity for the installation of air traffic control towers. Thus, the construction of new air traffic control towers is expected to enhance the demand for the installation of digital maps software.

Geographically, North America is witnessing significant market growth in the Global Aviation Digital Map Software market over the past few years. The market was primarily driven by huge investment in aircraft manufacturing by OEMs & the high presence of OEM manufacturers in the region such as Canada & the US. For instance, in 2020, Airbus plans to produce 63 A320 Family aircraft per month in 2021. The company also aims to expand its industrial footprint in the US by increasing the production rate of A320 family aircraft at its Airbus US.