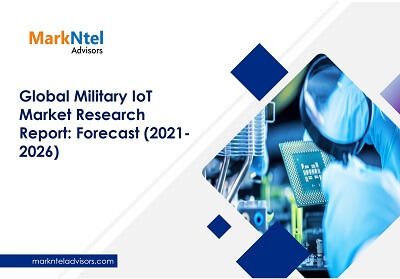 The integration of the Internet of Things (IoT) in the military or Military IoT is the effort to create interconnected entities for carrying out several military tasks or missions. Military IoT is likely to revolutionize the collection, analysis, and flow of information, which will support more intelligent interactions among individuals, interfaces, & networks, thereby enhancing the decision-making process on the battlefield. Advanced military forces or modern military significantly depend on electronic networks for communication & many other functions. Also, there are wide-range military benefits associated with the IoT integration into armed forces, ranging from vehicle maintenance to personnel monitoring to stock control.

The Global Military IoT Market is anticipated to grow at a CAGR of around 8% during the forecast period, i.e., 2021-26. The growth of the market attributes primarily to the mounting usage of the Internet of Things (IoT) to enhance national security by integrating the latest technologies into the defense sector. Hence, the adoption of IoT among armed forces has been increasing astronomically in the global defense industry over the past few years.

Moreover, the mounting need for a high level of physical security across the national territories shall also fuel the demand for military IoT. In addition, advancements in the infrastructural capabilities of the defense industry are paving way for the adoption of IoT technologies in the defense sector.

The IoT can be integrated into a wide range of military equipment, including vehicles and weapon systems. The most important aspect of using IoT in the military is its capability in providing proper situational awareness to warfighters on the ground. Most armed forces already use various sensors for gathering intelligence in real-time. Incorporating IoT solutions into military systems could enhance the operational picture available to commanders.

The Covid-19 pandemic in 2020 adversely impacted the economy of various countries worldwide due to partial or complete lockdown and movement restrictions. The manufacturers of military IoT products, including subsystems & components, faced significant revenue losses. Although integration of IoT in the military for various applications is becoming extremely important, the imposition of lockdown led to the disruption in the supply chain, which further resulted in a temporary halt in the manufacturing process. The global crisis also hampered the long-term military IoT contracts, which, in turn, also contributed to the declining market growth.

Lack of industrial activities hampered investments in projects, and the slowed economic situation led to the reduced demand for industrial products globally. However, the Covid-19 pandemic had a short-term impact on the demand for military IoT in the defense sector. Also, companies are collaborating with technology giants to develop & deploy digital technologies to enhance the efficiency of military operations. 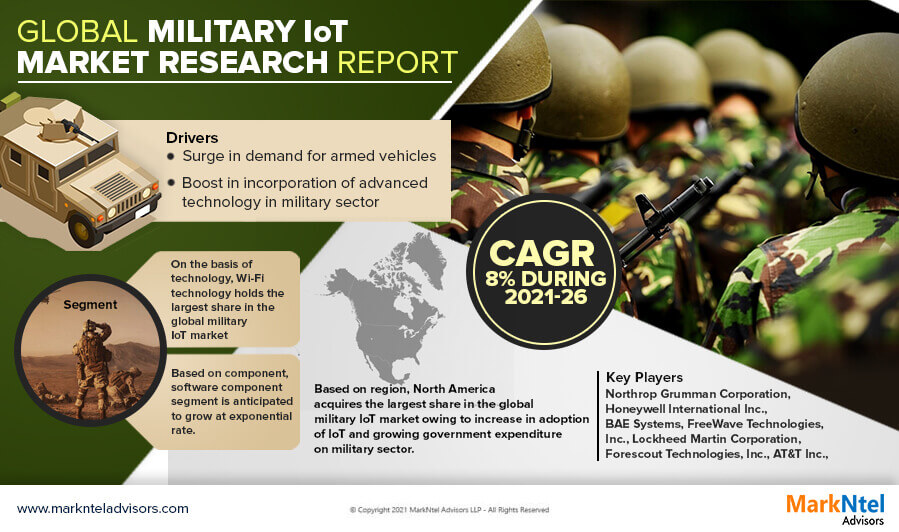 Of them all, Real-time Fleet Management acquired the largest share in the Global Military IoT market. The military sector invests optimally in fleet management since monitoring the fleet in real-time is quite difficult. The integration of IoT in the defense sector enables real-time GPS monitoring that helps display the overall state of the engine, speed & motor status, fuel economy, and much more information related to the vehicle. In addition, the military IoT is beneficial in enhancing productivity & manageability by sharing real-time data among vehicles & fleet managers.

Integration of IoT in the military fleet can help minimize human operating efforts and readily recognize abnormalities while immediately predicting the failure in various components of military fleets. Intelligent tracking also provides information regarding the operation of the driver and makes him accountable for every step of the vehicle. Apart from this, the use of IoT for real-time fleet management can also save fuel expenses by analyzing each activity and efficiently using the vehicle.

Furthermore, the Health monitoring application acquires a considerable market share. Integration of IoT is beneficial in assisting with the treatment of injuries & other medical conditions. In addition, it can also improve the speed & accuracy of delivering, often lifesaving, and medical treatment to soldiers. Hence, these aspects are expected to boost the adoption of Military IoT for medical applications over the forecast years.

Of them all, Hardware dominated the Global Military IoT Market with the largest share in recent years & anticipated to prevail in the same trend during 2021-26. It attributes principally to the mounting defense expenditure on developing technologically advanced devices like sensors, UAVs, wearables, health-check equipment, robots, biometrics, armors, & weapons as well as deploying them across different departments in the defense sector to efficiently exchange real-time information. These hardware components shall also enable soldiers to attain better situational awareness about the battlefield and make strategic & informed decisions at the right time. Hence, the demand for hardware military IoT is projected to soar substantially in the coming years & drive the global market through 2026.

On the other hand, the demand for Software-based IoT applications is projected to demonstrate significant growth during the forecast period. It owes primarily to the increasing utilization of technologies like the Internet of Things & Artificial Intelligence in IT applications of the defense sector to help military personnel maintain real-time communication using satellite communication devices.

5G allows connecting multiple devices, including those embedded with smart sensors. Data transfer rates using 5G are 100 times faster than the current ones, which will further help reduce network latencies, i.e., one of the most crucial aspects in the defense sector. The high capability of 5G technology will escalate the demand for more military IoT devices across the globe in the coming years. It will help military personnel transfer data at high speeds in real-time. Using this technology, the communication between military devices & individuals will be quicker, more efficient & stable since data can immediately be received & analyzed in the system, which would further assist in proper decision-making.

Geographically, among all regions, North America dominates the Military IoT Market with the largest share, principally due to the mounting utilization of IoT in the defense industry across the region for restrictive activities, coupled with the changing nature of wars, which requires the adoption of advanced technologies. Moreover, the extensive presence of well-established & technologically advanced market players and the escalating demand for agile IT infrastructure across North America shall further propel the regional market growth in the coming years.

Following North America, Asia-Pacific is projected to witness the fastest market growth during 2021-26. It owes to the increasing expenditure by countries like India & China toward enhancing their defense capabilities. China is investing heavily in its military programs for air, land, & sea defense. Moreover, the rapid adoption ofs cloud computing technology entwined with increased situational awareness & risk assessment is another crucial aspect expected to fuel the overall market growth in the Asia-Pacific during 2021-26.

Integration of IoT in the military is gaining traction as the technology is being highly appreciated and used worldwide. The government is massively investing and encouraging the usage of IoT in several developed and developing regions including North America, Asia-Pacific, and Europe. With the rising complexity and nature of wars and increasing demand for nation’s territory security, the government across the world are increasing their investments to adopt advanced technologies in order to improve their military efficiency.

The Internet of Things (IoT) is one of the most disruptive technologies that have emerged in recent decades. It is widely being used in several military applications. One of the biggest challenges that arise with the deployment of IoT systems in the military is security as it is the most important thing in military applications. Like other technology, IoT has the potential to introduce new attack surfaces in the military IT system. Depending on the use of IoT, the attacker may be more likely to have physical access to a device and access to a wireless communication channel between the IoT devices. This can eventually hinder the military operation.

A. Real-Time Fleet Management holds the largest share in the Global Military IoT Market, which shall create remunerative growth opportunities for the leading market players in the forecast years.

A. The increasing adoption of advanced technologies by armed forces worldwide to enhance the efficiency & effectiveness of various back-end military processes and, in turn, strengthen their national security are the key factors projected to drive the Global Military IoT Market during 2021-26.

A. In the coming years, the Global Military IoT Market is expecting lucrative growth opportunities owing to the continuously increasing use of advanced technologies in the defense sector across several countries worldwide to improve efficiency in military operations. 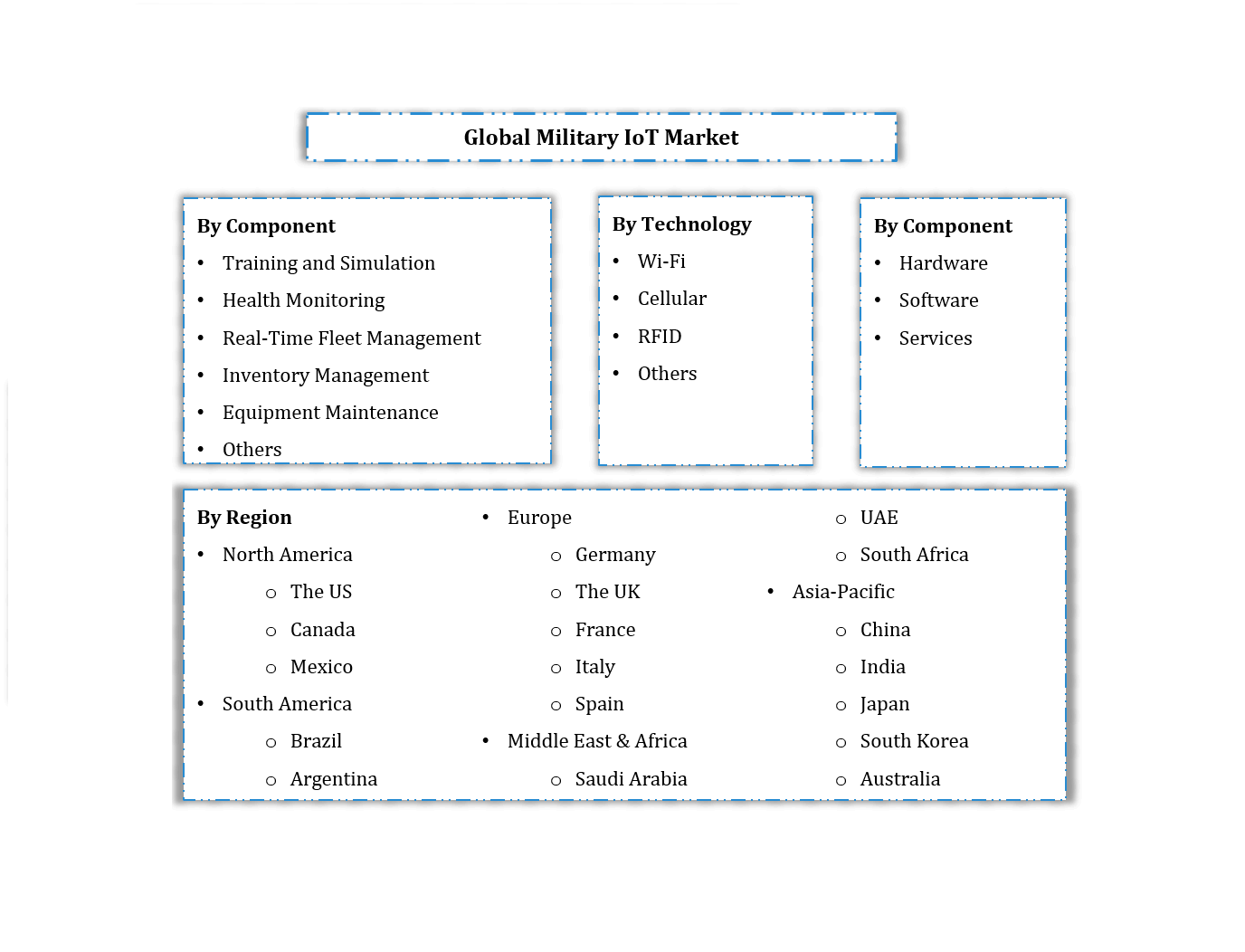