Cardiac Ablation is the practice that uses energy to make small scars in the heart tissues. It prevents distinctive electrical signals that move through the heart and generate an uneven heartbeat. It can also be used to treat Atrial Fibrillation (AFib), a type of uneven heartbeat. Ablation is performed routinely using Radiofrequency (RF) and Cryoballoon (CB) catheters, with RF catheters being the most widely used technology. So, cardiac ablation devices are those devices that are used as a minimally invasive option to treat AFib.

Atrial fibrillation (AFib) affects 37,574 million people globally (0.51 percent of the population), and its prevalence has risen by 33% over the last 20 years. In 2021, around 11.92 million people in Europe suffered from AFib, i.e., likely to increase by up to 70% by 2030. Moreover, by 2050, Europe is projected to have the greatest increase in AF patients compared to other regions globally.

The Global Cardiac Ablation Devices Market is projected to grow at a CAGR of around 16.53% during the forecast period, i.e., 2022-27. The global market has experienced significant growth during 2017-19, owing to the mushrooming elderly population across North America, Europe, China, and Japan. According to WHO, people aged 60 & above are projected to be over 1.4 billion by 2030.

Over the last few years, the number of persons suffering from cardiac arrhythmia, particularly atrial fibrillation, has skyrocketed globally, which, in turn, has surged the number of patients suffering from high blood pressure, heart attacks, strokes, etc. The mounting inclination toward minimal-invasive surgical procedures since they are less painful than other methods and facilitate easy recovery is driving the market.

Besides, the integration of various advanced technologies like robotics, 3D electro-anatomical mapping systems, etc., into cardiac ablation devices, coupled with escalating collaborations among companies to offer advanced devices, are also creating revenue-generating opportunities for the market.

Moreover, mergers & acquisitions among start-ups & well-established players operating in cardiac ablation technology are also on the rise. The existing cardiac ablation solution providers are focused on expanding their device portfolio and gaining access to new technologies & geographies via strategic events.

Impact of COVID-19 on the Global Cardiac Ablation Devices Market

The Covid-19 pandemic has been a catalyst in the growth of the Global Cardiac Ablation Devices Market. According to the United States Department of Veterans Affairs, the number of cardiac patients has soared immensely after the pandemic. Moreover, the intensity of cardiac diseases has also increased massively among the existing cardiac patients worldwide.

According to Washington University, the risk of heart failure has increased by around 72%, heart attacks by 63%, & strokes by 52% among the patients who had mild cardiac disease symptoms before the pandemic. The same trend has been observed in other countries like Germany, the UK, Sweden, Japan, India, GCC, France, etc. This sudden increase in the number of cardiac patients is projected to soar the demand for cardiac ablation devices in the coming years. 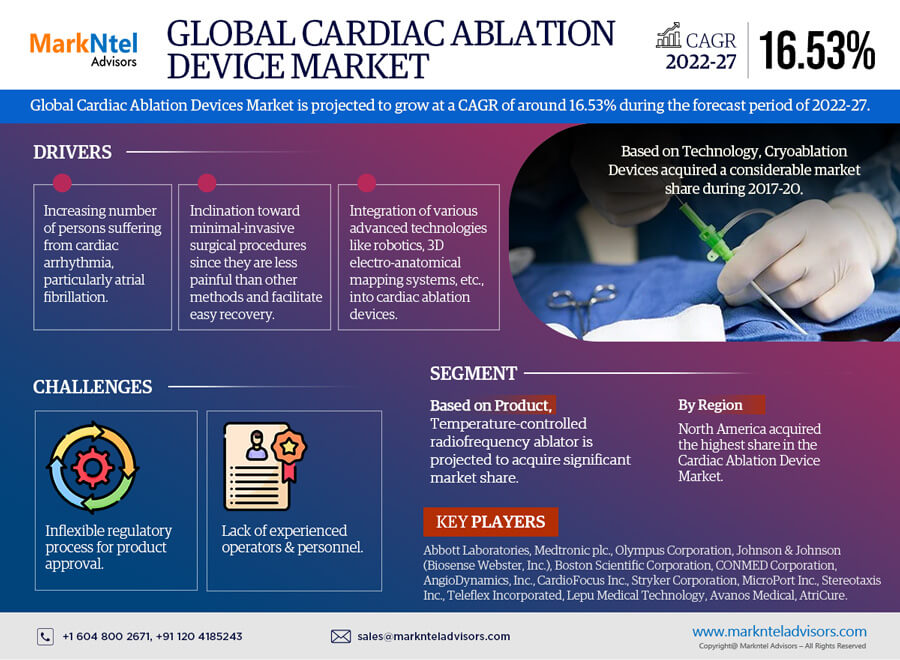 Based on the Product, a Temperature-controlled radiofrequency ablator is projected to grab significant market share in the global cardiac ablation device market. The radiofrequency ablation technology-based devices are considered highly effective in ventricular tachycardia (VT) treatment (100% success rate in eliminating VT from patients.)

Here, Cryoablation Devices acquired a considerable market share during 2017-20, and the same trend is anticipated to prevail over the forecast years. These devices have shown higher efficiency in preventing atrial arrhythmia recurrence than other techniques. The strategic collaborations among different companies toward developing Atrial Fibrillation devices using Cryoablation technology are driving the market. Besides, emerging economies like India & China are considered attractive markets to launch cryoablation devices due to the rising number of cases of AFib. In 2020, the rate of AFib in both these countries was in the range of 1% to 4%.

Across China, around 1.8% of the population are diagnosed with AFib based on either a medical history or a single time-point ECG screen. According to the European Society of Cardiology, the efficacy of cryoablation exceeds 70%-80%, and use cases of this therapy are rising significantly in both countries. As a result, Cryoablation Devices would witness surging demand in the forthcoming years.

On the other hand, the demand for laser ablation technology is also propelling significantly, owing to the rising approvals by the government to use laser technology in ablation devices for the treatment of AF due to low radiation exposure.

Atrial Fibrillation and flutter witnessing astronomical growth in the global market as it is among the most common heart rhythm disorder among the geriatric population, owing to which the risk of heart failure and stroke has increased substantially. In 2017, around 37.57 million prevalent cases and 3.05 million incident cases of AF were projected globally. The surging approval by the government on ablation devices to treat AF and substantial rise in death rates from atrial fibrillation especially in Europe, North America, and the Asia-Pacific region are thriving the market growth. Moreover, the soaring number of ablation device manufacturers across the developing countries & the significant surge in the prevalence rate of atrial fibrillation among Medicare fee-for-service (FFS) beneficiaries are expected to fuel the market growth for cardiac ablation devices in the forthcoming period. Around 1–3% of the population suffers from atrial fibrillation (AF) in Europe. 14.4 million people over 65 in the EU are expected to have AF by 2060.

Of both, In-patients held the highest share in the Global Cardiac Ablation Device Market in 2021, primarily due to the surging incidences of cardiovascular diseases among the elderly population worldwide, coupled with the increasing number of hospitalizations due to AFib. Besides, the adoption of MRI ablation centers in hospitals to offer cost-effective treatment for cardiac arrhythmias is another crucial aspect driving the market through In-patients.

Of all regions globally, North America acquired the highest share in the Cardiac Ablation Device Market in the historical period since it is an early adopter of advanced technologies in cardiac ablation. Favorable reimbursement policies for cardiac ablation procedures, the extensive presence of giant market players like Johnsons & Johnsons, Abbott, CardioFocus, etc., and mounting incidences of cardiac diseases, especially AFib, in the geriatric population, are the prime factors driving the regional market.

Atrial Fibrillation (AF) has been a common type of arrhythmia in which the heart beats rapidly or slowly. It can either result in strokes or heart failure and happens mainly due to excessive intake of alcohol & caffeine, sedentary lifestyle, smoking, consumption of dietary supplements, etc. Due to this, heart diseases, high blood pressure, chronic heart diseases, thyroid, obesity, etc., have increased substantially. AF often coexists with heart failure as well as obesity in the aging population.

Moreover, the prevalence of AF is higher among people aged 65 & above. The escalating geriatric population in both developed & developing countries like the US, Japan, countries of Western Europe, and India & China are expected to propel the incidence rate of AF in the coming years.

As a result, it would accelerate the demand for cardiac ablation devices over the forecast years. Japan, China, etc., are amongst the most impacted countries by AFib in 2022. With the continuous growth in the aging population in Japan, an estimated 1 million patients are expected to have AFib by 2030, as reported by the European Society of Cardiology.

Besides, the steady rise in AFib-related hospital admissions, mounting inclination toward cardiac ablation for AFib treatment, and investments made by several companies in this sector to maximize their revenue are other crucial aspects anticipated to drive the market during 2022-27.

The Robotic Navigation System is 70% to 80% faster than the previous one & offers more flexibility. This system allows optimal catheter stability and reproducible catheter movements to obtain better results. The system has been efficient in doing ablation of both simple and complex arrhythmias, mainly atrial fibrillation. The usage of robotic navigation systems has been announced by several companies specializing in cardiac ablation devices. In addition, the FDA approval on their usage has also been registering an uptrend. For instance, the Stereotaxis robotic navigation of magnetic ablation catheter received FDA approval in 2020.

A. Radiofrequency, and laser ablation are anticipated to emerge as an opportunity area for the leading players in the market during the forecast period.

A. The growing number of AFib patients owing to changing lifestyles & climatic conditions would present immense revenue-generating opportunities for the Global Cardiac Ablation Devices Market in the coming years.