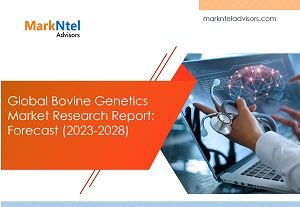 Bovine genetics commonly referred to as animal genetics, is a branch of animal sciences that determines and analyzes the genetic formation of animals. It predominantly deals with genetic variations and animal heredity in domestic and wild animals. Besides, it is one of the pillars of livestock development (alongside animal health, animal nutrition, and husbandry issues such as housing), ranging from characterization to conservation to genetic improvement. Genetic trait testing, DNA testing, and Genetic disease testing are a few commonly used tests performed for such purposes. The branch has gained popularity due to the increasing prevalence of diseases in pets.

The Global Bovine Genetics Market is projected to grow at a CAGR of around 6.7% during the forecast period, i.e., 2023-28. The market is primarily driven by a swiftly augmented demand for meat and dairy products stemming from the rising population. The growing consumer affinity for animal-derived food products to meet nutritional requirements has led to selective breeding and the large-scale raising of livestock. It can be substantiated by the fact, that animal-based foods are enriched with various nutrients, including fat, riboflavin, iron, zinc, calcium, and vitamins A, B, D, and E, and facilitates proper body growth. Besides, the market is getting bigger due to the hassle-free accessibility of animal-based food products across both online and offline distribution channels, as well as a variety of facilities like doorstep delivery, attractive discounts, and secure payment gateways.

In addition, the market is growing as people become more aware of veterinary genetic illnesses and embrace cutting-edge genetic and molecular biology methods at a faster rate. In accordance with this, the market might witness considerable investments in research and development (R&D) activities to create techniques for evaluating molecular data and establishing tools to combine data with already-existing phenotypic and biological information. Other than this, the generous funding to accelerate continuing animal research and identify superior animal breeds accompanying the increasing adoption of artificial insemination techniques has furthered the market expansion in the past few years.

In response, key players in the market are relentlessly making investments to develop more innovative products and solutions to tackle rising problems relating to livestock farming. Nonetheless, higher costs associated with animal testing, lack of technical know-how regarding advanced animal genetic tools paired with inadequate well-trained professionals are some of the factors likely to hinder the market growth in the forecast period.

Based on Genetic Material,

Here, Embryos are foreseen to acquire a sizable share of the Global Bovine Genetics Market in the projected time frame. It is primarily because innovative biotechnologies in embryology seem to be the most effective instruments, as per animal scientists and breeders. Embryos as genetic material, along with these cutting-edge technologies, have been predominantly used to enhance the genetic makeup of bovine herds. The idea behind transferring embryos in cattle is to ramp up production rates. Moreover, Embryos can alter the breed of the entire herd within a single generation with a relatively lesser cost than those of semen or postnatal animals.

Based on Genetic Testing Service Type,

Among all, DNA Typing is projected to gain traction during the forecast period. The advent of testing technology has facilitated traits identification like behavior, coat color, temperament, and vulnerability to contagious diseases, including cancer. The bovine DNA test is a biological offspring test that utilizes genetic traits to determine whether the genotypes of the bred bull and the cow match the genotypes of the offspring. The test identifies and examines the DNA genotype matches through genotype analysis in cow samples. For instance,

Here, Asia Pacific is expected to dominate the Global Bovine Market with the fastest growth rate exhibited by the region in the historical period. The factors backing such dominance can be accredited to the rising meat consumption and increased animal output across the region. Besides, the substantial investment made by the countries in animal genetics to identify genetic traits and treat major disorders in them has further encouraged market growth in recent years. For instance,

To level up the genetic performance across Africa, Neogen has collaborated with a multispecies animal breeding and genetic technology firm, Hendrix Genetics. The goal is to upgrade the existing recurrent test program while aiding the implementation of genomic selection in Hendrix’s SAPPSA program.

The market has been swiftly stimulated by the relentless investment made by the government and the healthcare giants in order to identify superior disease-resistant breeds. In fact, scientists have discovered features inside genes that regulate the health, growth, and nutrition intake of animals. These genetic discoveries are likely to accelerate market revenue while positively influencing the environment.

Moreover, almost a billion people count on livestock and animals for their food security and livelihoods, and livestock and animals account for roughly one-third of worldwide agricultural output. Therefore, studying animal genetics to determine and produce disease-resistant breeds is paramount for the growing population.

The development of bovine genetics is likely to be benefited from the increasing use of selective breeding in animals. Domestic animal paternity can be determined and controlled using DNA forensics. DNA typing has been widely used to diagnose genetic issues in cattle, which, in turn, aids in the segment's growth. Additionally, when the practice of selective breeding for desirable traits is embraced more generally, there would be a surge in demand for animal genetics services and an expansion of the market.

A. The Bovine Genetics Market has been swiftly stimulated by the relentless investment made by the government and the healthcare giants in order to identify superior disease-resistant breeds.

A. ‘Embryo’ is anticipated to emerge as an area of remunerative opportunities for the leading players in the Bovine Genetics Market during the forecast period.

A. ‘Asia-Pacific’ is likely to grow with the maximum pace in the Bovine Genetics Market during 2023-28.

A. Expansive adoption of selective breeding in animals emerging as a growth opportunity for the Bovine Genetics Market through 2028. 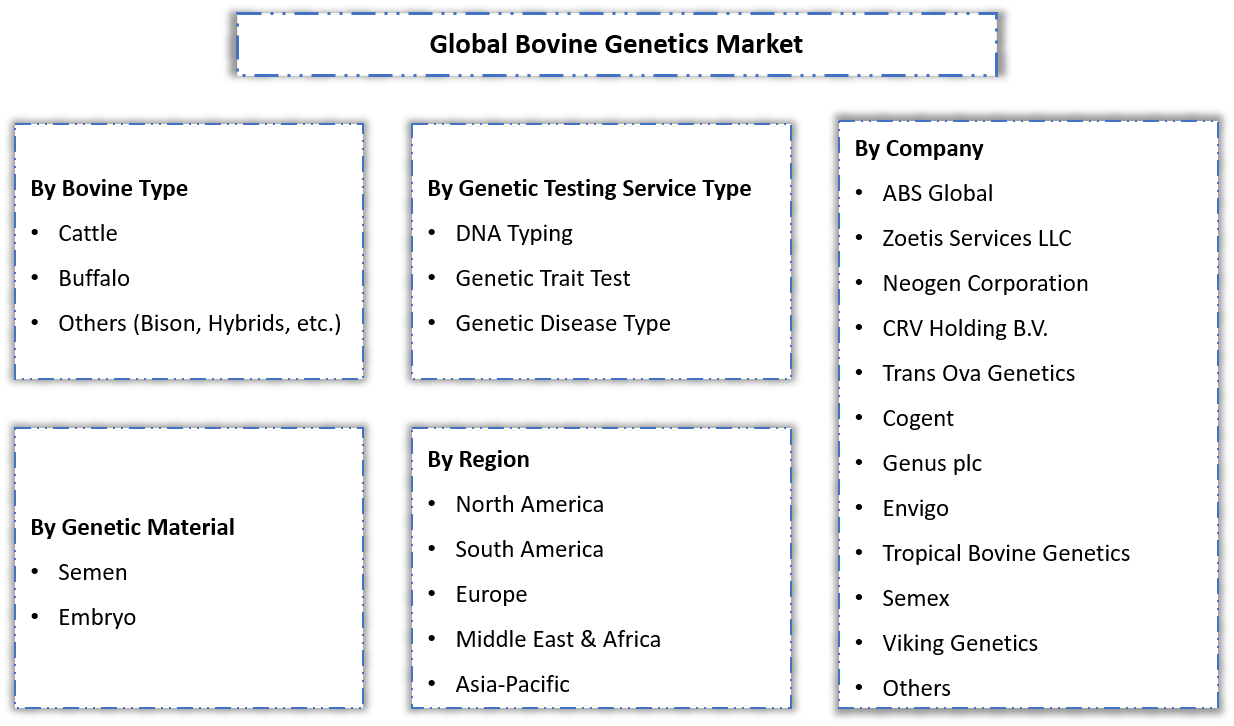