The Global Thin Film Solar Panel Market is expected to grow at a CAGR of 17.29% during the forecast period of 2022-27, says MarkNtel Advisors in their recent research report. This is attributed to the various features of the thin-film solar panels, such as less waste generation, containing fewer toxic components, being affordable, and being easy to manufacture & install in both emerging & developed economies. Thin-film solar panels are commonly used in commercial & institutional buildings with open spaces & large rooftops.

Further, other solar-related products, including solar kits for camping, portable solar systems, solar panels for backpacks, and solar-integrated items like solar tents, have been gaining popularity due to their lightweight design. Hence, this resulted in the burgeoning demand for thin-film solar panels globally. In addition, numerous renewable energy plans by various countries such as the US, China, and India to address rapid climatic changes have stimulated market growth.

Moreover, the rapid installation of thin-film solar panels across the commercial & industrial sectors and the rising global demand for solar energy are also expected to drive the Thin-film Solar Panel market over the forecast period. 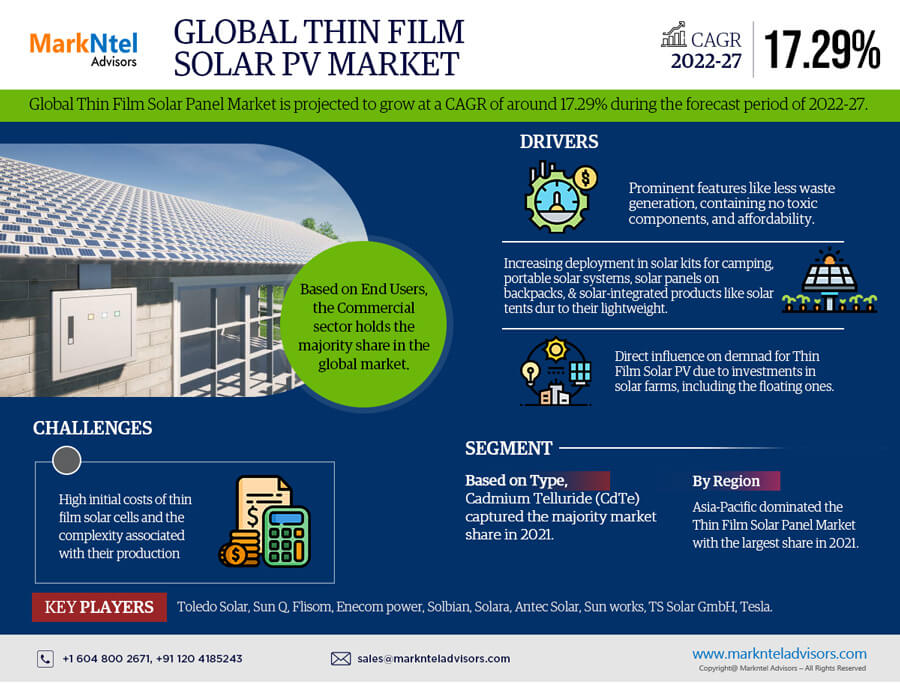 Cadmium Telluride (CdTe) Held a Significant Share in the Market

Based on the type, the market bifurcates into Amorphous Silicon (a-Si), Cadmium Telluride (CdTe), Copper Indium Gallium Selenide (CIS/CIGS), and Others. Among them, Cadmium Telluride (CdTe) grabbed the highest share during the historical years, and the trend would continue to flourish in the forthcoming years. Cadmium Telluride-based thin-film solar cells are manufactured at a very low cost, as cadmium can be formed as a by-product of the mining & refining of zinc, lead, and copper. Besides, it magnifies the production capacity of solar PV cells at a much lower cost & higher light absorption capacity than other materials.

Geographically, the Asia-Pacific region captured a notable growth rate during 2017-21, owing to the increasing deployment of solar PV modules for utility-scale, commercial, and residential applications. The rise in awareness among consumers for sustainable energy generation practices resulted in escalating market growth. Moreover, the continuous development of regulatory policies, primarily in India & China, led to increased market growth. Further, China has been a prominent manufacturer of PV panels, owing to the considerable government focus on reducing the reliance on fossil fuels to minimize the carbon emission levels. This would result in escalating the development & production of thin-film solar panels.

In addition, in December 2021, the Chinese government announced to increase the share of renewable sources (both wind & solar) of energy to 25% by 2030, where thin-film solar power is expected to play a prominent role. Besides, the growing establishment of new production facilities for CdTe solar panels in the countries such as China & India would lead to increased market growth in the coming years, reveals MarkNtel Advisors in their research report, "Global Thin Film Solar Panel Market Analysis, 2027."