The Global Hydrogen Gas Generation System market is projected to grow at a CAGR of around 5% during the forecast period, 2022-27. With the growing demand for hydrogen gas in different sectors such as industrial, transportation, healthcare, oil & gas, etc., the Hydrogen Gas Generation System market would witness a considerable incline in the forthcoming years. In addition, the increasing demand for hydrogen gas for fuel cells in the automobile industry as well as the clean energy goals of various countries such as the US, India, Germany, etc., would further stimulate the market for hydrogen gas generation systems. Furthermore, the factors such as increasing demand for low greenhouse emissions, rising environmental concerns, and the government's stringent emissions norms have been the major factors driving the need for hydrogen gas as an alternative fuel in various industries such as chemical processing, refining, fertilizers manufacturing, petroleum recover, etc.

Moreover, the carbon emission targets in industrial sectors like in automobile industry have boosted the demand for hydrogen gas generation systems across the globe. Along with that, many countries such as China, the US, India, and others have been extensively devoted & taken initiatives for the expansion of hydrogen gas production systems. In 2022, India’s one of the largest oil companies, Indian Oil Corporation, announced to set up green hydrogen plants at its Mathura & Panipat refineries by 2024. Furthermore, the firm has the target to produce 70,000 tonnes of green hydrogen by 2030. 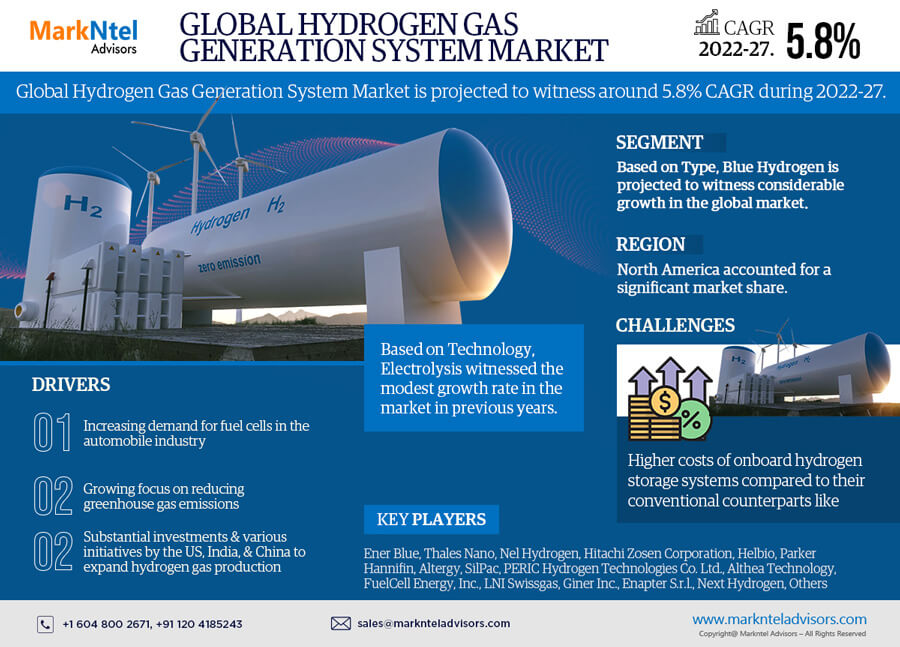 Based on the Type, the market bifurcates into Green Hydrogen, Blue Hydrogen, and Grey Hydrogen. Among the three, the Blue Hydrogen type has accumulated a considerable share in the Global Hydrogen Gas Generation System market due to its cost-effective production technique. Steam methane reforming has been a majorly used technique for the production of blue hydrogen in historical years.

Additionally, blue hydrogen production plants have also been proposed to curb carbon emissions. For instance, in 2022, Reliance Industries Ltd., announced to re-purpose the existing plant, which converts petroleum coke into synthesis gas for the production of blue hydrogen for USD1.2 to 1.5 per kilogram. Along with this, the company has targeted to set a net-zero carbon emission for its business by 2035.

Nevertheless, the objective of blue hydrogen gas production by the government of nations such as South Korea would further provide the potential area for the Global Hydrogen Gas Generation System market to grow significantly in the forecast years. For instance, as of 2021, the South Korean government aimed to produce 27.9 million blue hydrogens by 2050.

Geographically, North America contributed significantly to the growth of the Global Hydrogen Gas Generation System market in the historical years. The growth of the market has been primarily driven by its large number of applications in several industries such as automotive, chemical, healthcare, power generation, metal fabrication, welding, and many more. The rapid industrialization in the region has negatively impacted the environment of the region, which, in turn, has led the government of countries in North America such as the US & Canada to take initiatives for clean energy production techniques.