The Global Fire Control System Market is projected to grow at a CAGR of 5.22% during the forecast period, 2022-27, says MarkNtel Advisors in their recent research report. The major factors contributing to the growth of the Fire Control System market are the rising investments by the governments across the globe for the modernization of their military fleet as well as strengthening their military capability by procuring more precision weapon systems & other equipment for the military bases. In 2019, as per SIPRI, the US government released a USD734.34 billion budget for its defense sector, which was 5.68% higher, compared to the previous years.

Additionally, the ongoing progression of procurement & up-gradation program of armed forces, rising territorial disputes leading to geopolitical concerns as well as involvement in the peacebuilding missions shoved the government of various countries such as the US, Canada, Germany, Brazil, Saudi Arabia, Russia, etc., to increase their defense expenditure. In lieu of this, the US government started the US Nuclear Modernization Programs for the refurbishment of its nuclear warheads. Under this, the US maintains an arsenal of 1700 strategic nuclear warheads for deployment on intercontinental ballistic missiles (ICBMs), submarine-launched ballistic missiles (SLBMs), and strategic bomber bases.

Moreover, it is also expected that the governments of these countries would primarily take necessary initiatives in order to fulfill the objective of providing long-term viability to their armed forces, increasing their defense budget, enhancing the purchase of firearms equipment, and commensurate with the requirement of national interests, would further propagate the market of fire control systems in the forthcoming years, states the research report, "Global Fire Control System Market Analysis, 2022-27."

Automatic Launchers Segment to Thrive the Market, Owing to the Rise in Upgradation of Existing Weapon Platforms

Based on the Weapon Class, the market bifurcates into Automatic Guns & Launchers. Among the two, the Launchers weapon class grabbed a sizeable market share in the Global Fire Control System market in the historical period, 2017-2021, and is also expected to retain it in the coming years. With the escalating geopolitical tensions & the high demand for military modernization plans in some of the top defense spenders such as the US, Russia, India, China, Israel, etc., the militaries of these countries have increased their investment plans accordingly. This increase in investment has been focused on the growing need to build robust infantry units along with the mechanized units in land forces as well as to enhance the effective firepower of the troops. 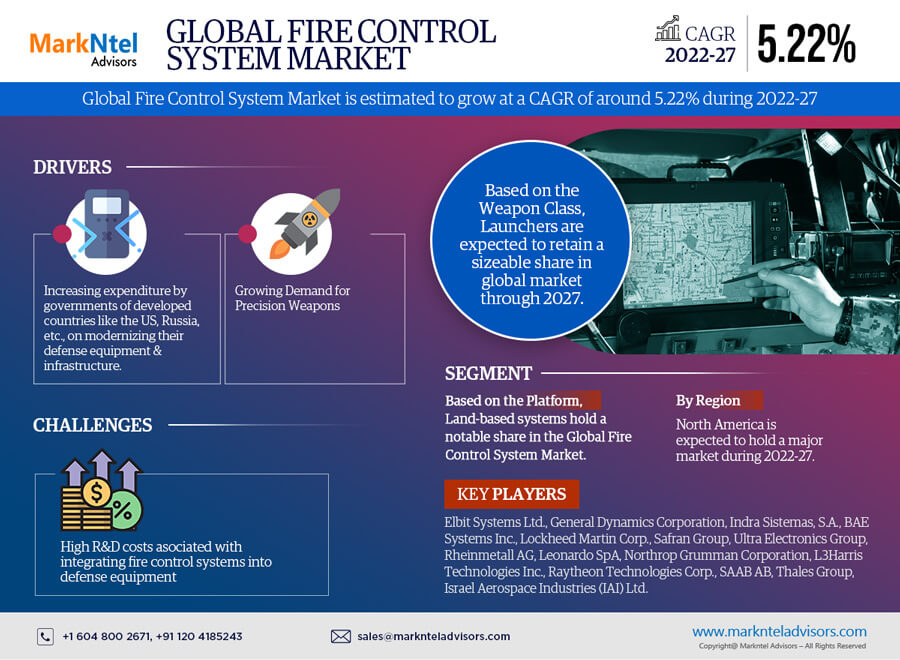 In terms of geography, North America witnessed an exponential growth in the Fire Control System market during the historical period. One of the significant reasons for the market progression of the fire control system in North America is due to the existence of key manufacturers for weapons delivery systems and their platforms like Lockheed Martin, General Dynamics, Raytheon Technologies, etc. These military equipment manufacturing companies are large-scale exporters of military weapons across different countries. Additionally, the country of North America such as the US, Canada, and Mexico, are investing extensively in the development & rejuvenation of the Naval fleet, owing to the intensifying requirement for combating naval challenges. This has led these countries to acquire new & advanced naval weapon systems for attack & surveillance operations. As per the US defense budget 2022, the Navy received USD26.7 billion to purchase 13 new ships, thereby maximizing Naval power.

Besides, the growing budget of the Navy as well as the procurement of ships, submarines, frigates, destroyers, etc., would increase the market growth for fire control systems in the upcoming years, reveals MarkNtel Advisors in their recent research report, "Global Fire Control System Market Analysis, 2022-27."