According to MarkNtel Advisors, the Global Aircraft Paints and Coatings Market is projected to grow at a CAGR of around 3.98% during the forecast period, i.e., 2022-27. The burgeoning demand for aircraft paint & coatings in countries such as the US, Russia, Italy, China, etc., is benefitted highly from the aircraft manufacturing industry. Additionally, the mounting production of commercial & military aircraft, helicopters, drones, etc., for exports to various countries, such as Japan, South Korea, India, Canada, Mexico, the UK, Germany, and China, among others, has surged the application of aircraft paints & coatings. According to the Aerospace Industries Association (AIA), in 2020, Germany, France, Canada, the UK, and Japan were the foremost destinations for the US's Aerospace & Defense (A&D) exports, including civil aerospace, defense aerospace, & defense non-aerospace.

Furthermore, with the advancement in technology, Solvent-based Paints have been extensively used in the exterior painting of an aircraft. Besides, some of the key factors contributing to the increase in demand for solvent-based products include the constant changes in temperature, air pressure, and UV ray protection of the airframe. Moreover, developing new eco-friendly aircraft paints & coatings products is anticipated to have a positive impact on the market for aircraft paints going forward.

Based on resin type, the market bifurcates into Polyurethane, Epoxy, and Others (Silicone, Polyester, & Acrylic). Among them, Polyurethane & Epoxy resin types captured a notable share in the Global Aircraft Paints and Coatings market during the historical period. The factors responsible for the growth are their high strength & ability to provide better protection against dust, which helps to reduce the aerodynamics of an aircraft.

Further, polyurethane-based paints & coatings have several characteristics, such as high resistance to chemicals, solvents, and abrasion, that make them convenient for large-scale industrial applications, such as the coating of commercial aircraft, for which several companies use Polyurethane coatings.

Besides, military aircraft with high requirements for maintaining steady performance in high & low temperatures & reducing leakage in & out of the aircraft have increased the demand for Polyurethane for insulation purposes in military aircraft. 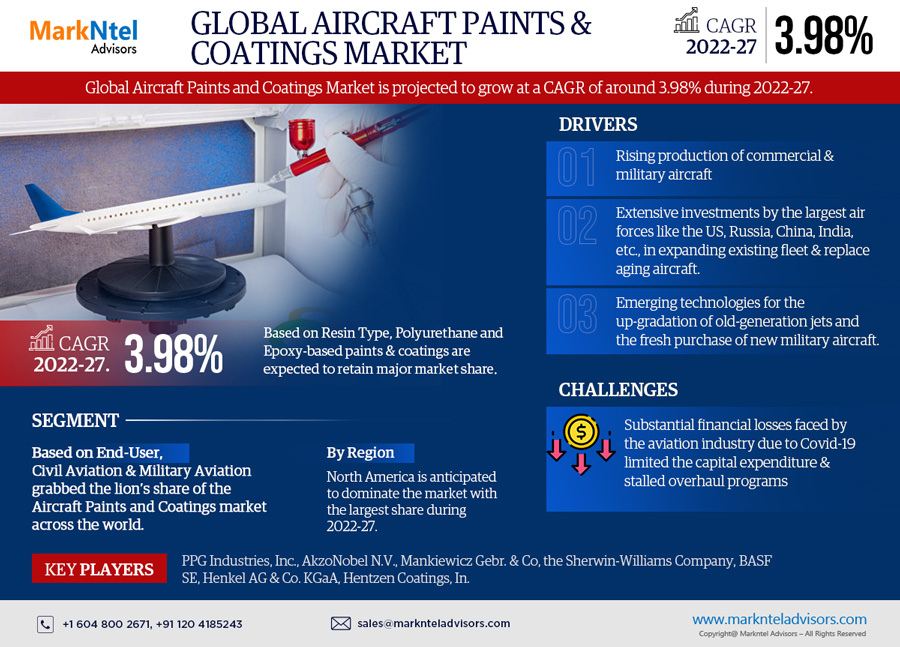 North America to Witness Substantial Growth in the Years to Come

Geographically, North America accounts for the largest market share in the Global Aircraft Paints and Coatings market, and the market dominance will persist in the years ahead. The growing adoption of advanced technology led to the increasing investments towards manufacturing technologically advanced aircraft, growing government investment in procuring fighter jets, etc., are the factors enhancing the requirement for aircraft paints & coatings market in the North American region. In addition, the rising manufacturing of commercial & military jets, helicopters, UAVs, etc., and the growing government investment in the development of next-generation aircraft for the military have helped to increase the market for paints & coatings in the North American region.

Moreover, the US is a major country that is driving the demand for Aircraft Paints and Coatings in the regional market, owing to the presence of large aircraft manufacturing facilities such as Airbus & Boeing. With the surge in the air traffic as well as the rapidly growing requirement for the military up-gradation with the fifth-generation aircraft, UAVs, special mission aircraft, combat helicopters, etc., the demand for aircraft paints & coatings is expected to flourish during the forecast years.